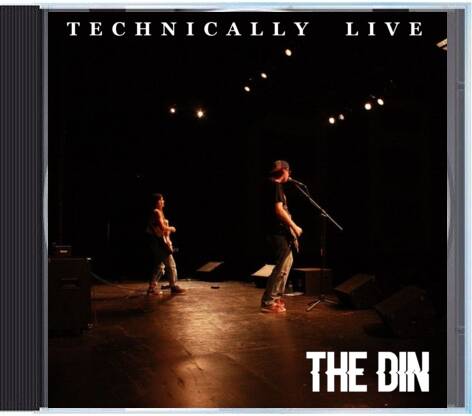 Taped at the Baldwin Auditorium at The Tech in downtown Sault Ste Marie on 12 August 2016, Technically Live is The Din's chronologically first live album to feature all members of the band playing their instruments of choice in a fully electric setting.

Serving as the launch concert for their debut album Give In To The Din, the group delivered an energetic and blistering set of original and cover material alike. Featuring renditions of all nine album cuts, four fan favorite cover songs, and a non-album original track titled Differences, this vault release is essential for both new listeners and longtime fans alike.

The song performances included on the record are largely unaltered, though occasional missed notes have been smoothed over in post-production. As is the case with the group's 2018 live album The Suburban Sendoff, preservation of the human element on the live tape was of the utmost importance when trimming the audio for release. However, with Technically Live, some between-song banter was trimmed from the tape to make for a higher-energy release with less downtime between cuts. The recording plan used at the auditorium included a single microphone solely dedicated to capturing crowd noise, which aided efforts in post-production to include as much applause and crowd interaction as possible during and between songs.

The live board audio was recorded and subsequently mastered by Daniel Schmidt of Pretoria Hill Productions, and edited further for commercial release by Mike Haggith of MorningStar Studios.

CD pressings are manufactured to order, and distributed by Kunaki LLC of Brooklyn, New York.